Get all the latest information on events, sales and offers. Sign up for newsletter: "Santa Claus" is probably the most known alias of the "Gift Giver" known around the world so we will start here when looking at a bit about the history of this tradition.

According to history, Santa Claus is 1751 years old as of 2022.  In fact, Santa Claus's origins can be traced back to a monk named Saint Nicholas who was born between 260 and 280 AD in a village called Patara, in present-day Turkey.  Archaeologies in southern Turkey say they have discovered the tomb of the original Santa Claus underneath his Church of the same name near the Mediterranean Sea, Saint Nicholas of Myra (now Nemre) was known for his generosity and anonymous gift giving.

It is said that he gave away all his inherited wealth and travelled the countryside helping the poor and the sick. One of the best known stories is the time he saved three poor sisters from being sold into slavery or prostitution by their father by providing them a dowry so that they could be married.  Over the course of many years his popularity spread and he became known as the protector of children and sailors.  His feast day is celebrated on the anniversary of his death, December 6th.

When the veneration of saints began to be discouraged in the 16th-century after the Protestant Reformation, St Nicholas still maintained a positive reputation in Holland as "Sinter Klaas", the patron saint of children.  Along side Sinter Klaas was his side-kick Zwarte Piet "Black Pete" which was his helper in Moorish attire and in blackface.  Yeah...  After some conflicts in the 2010's they now feature Black Pete with coal smudges on his face rather then full blackface to try and make him a bit more acceptable. ;)

It was from the Dutch that the American culture finally adopted Santa Claus from in 1804 by John Pintard, a member of the New York Historical Society, distributed woodcuts of St. Nicholas at the society's annual meeting.  The background of the engravings contains now-familiar Santa images including stockings filled with toys and fruit hung over a fireplace.

In 1809, Washington Irving helped to popularize the Sinter Klaas stories when he referred to St. Nicholas as the patron saint of New York in his book, The History of New York.  As his prominence grew, Sinter Klaas was described as everything from a "rascal" with a blue three cornered hat, red waistcoat, and yellow stockings to a man wearing a broad-brimmed hat and a "huge pair of Flemish trunk hose".

In 1820 and onwards Santa was EVERYWHERE.  In 1841 thousands of children visited a Philadelphia shop to see a life-size Santa Claus model.  In the 1890's the Salvation Army needed money to pay for the free meals they provided needy families so they began dressing up unemployed men in Santa Claus suits and sent them to the streets to solicit donations.  From here you started to see Santa's everywhere!

The interesting part of all the above is that NO WHERE does it talk about a man who has elves or flies through the sky to deliver gifts to houses.  Where does all that come from??  We were all taught this growing up.

Few historians disagree that, like most holidays, Christmas, was created to offer a Christian alternative to Yule which, at the time, was a very popular pagan winter holiday.  Many of today's popular Christmas traditions include decorating trees, wreaths, mistletoe, yule logs and such which are all part of Yule celebrations.  The Yule festival was also connected to Odin's "Wild Hunt" that involved him flying through the sky at night on his 8-legged flying horse named Sleipnir.  Evidence of this original holiday can still be seen in many popular Christmas carols that include Yule, Yuletide, Yule Log, etc... proving that many of the original Yule traditions stuck around throughout the years.

Yule celebrates the promise of light again triumphing over darkness and the rebirth of the sun.  During Yule, all the gods are honored, especially Odin - who is also referred to as Jólfaðr (Yule Father).  Yule is known as a time in which family and friends would strengthen their ties to each other through hospitality, feasting, drinking, gift-giving, and making merry in the face of the privations and dangers of winter. 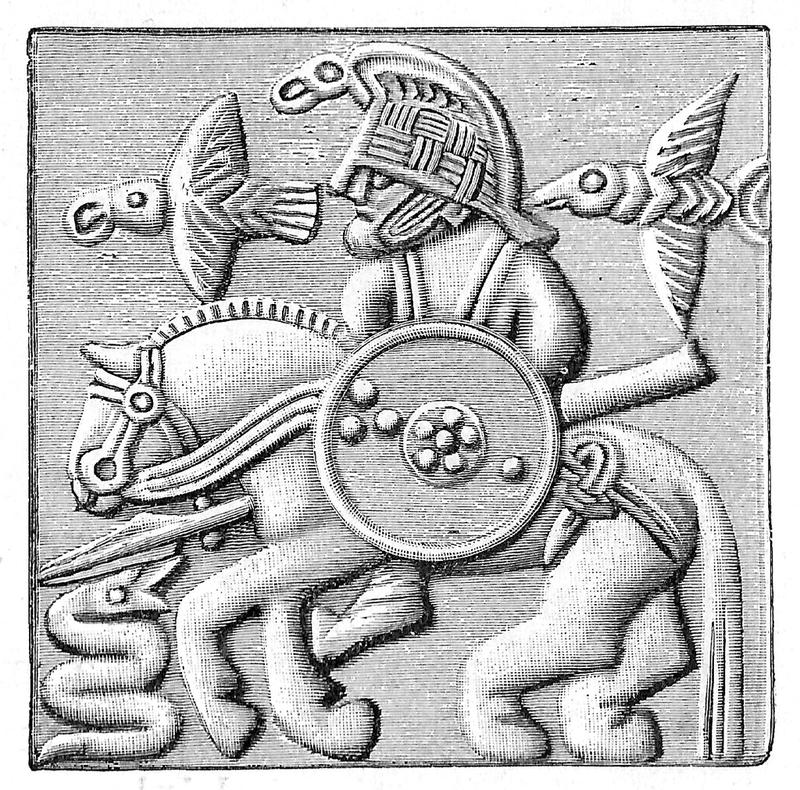 It is believed that Odin would cross the skies during the nights of Yule, rewarding the good and punishing the bad.  The Vikings and other northern European peoples believed that Odin raced across the windy night skies leading his pack of gods, elves, beasts, and ancestral spirits in a great hunt against the ice giants and the forces of darkness.  This Wild Hunt, as it was often called, was linked to winter storms and dangerous omens.  While the Wild Hunt was on, those who provoked the ire of the golds could find themselves caught in bad luck and Odin's wrath, while those whom Odin favored would receive good fortune and gifts.  Though the Wild Hunt could happen any winter's night, it was especially associated with the 12 nights of Yule.

Above: 1872 painting by Peter Nicola Arbo named "The Wild Hunt of Odin"

Odin's 8-legged flying horse is named Sleipnir.  When going to war, Odin was depicted riding on Sleipnir's back.  And while the other Norse gods were known for having chariots that were drawn by maigical flying beats (like Thor's goats or Freya's cats), the Eddic Poem, Sigdrifumal, mentions Sleipnir having runes cut into his teeth and onto the straps of his sleigh, which shows that the magical flying horse also (at least at times) pulled a sleigh.  In snowing Scandinavia, animal drawn chariots were replaced by animal drawn sleighs.  Three such sleighs were found in famous Viking Oseberg ship burials. By the time the fictional character of Santa was first created, reindeer were well-known as sleigh pulling animals in cold lands bordering the Northern Scandinavian realms.  With that in mind and the fact that Sleipnir had 8 legs, it makes sense to make Santa sit in a sleigh pulled by 8 reindeer.

Norse mythology has many instances of Odin giving gifts to humankind.  Odin would sometimes show up and provide a worthy person with some special item they needed.  For example, in the Volsunga Sega, Odin arrives in his now-familiar disguise to give the hero, Sigmund, the gift of a magic sowrd.  In the Saga of Hrolf Kraki (Hrolf the Tall), King Hrolf refuses the gift of hospitality, armor and weapons from an old, bearded man with a missing eye - only to later realize the gift-giver was Odin in disguise.  Hrolf later dies as a result of not having these weapons.  One of the many names for Odin was Oski (Wish Granter).

In the Eddic poem, Voluspa en skamma, Freyja elaborates on Odin as a gift-giver:

"He gives gold to those who are worthy.
He gave Hermoth a helmet and armor.
He gave Sigmund a sword as a gift.
He gives victory to some,
and gives money to others"
(Crawford translation)

For those who insist that Odin was not known as a gift giver are simply
mistaken.

The dwarfs and elves of Norse mythology were specifically known to be the creators of wonderous things, such as Odin's magical spear (Gungnir), Freyr's magical ship (Skidbladnir), Thor's magical hammer (Mjolnir), and other known gifts. Though Alfheim (the realm of the Elves) was later gifted to the god Freyr, the Elves always have had a special alliance with Odin and are mentioned alongside the gods in many Eddic poems.

Odin knew if you were bad or good

Odin was considered the far-seeing, all-knowing god of Norse mythology. He sent out his two ravens, Huginn and Muninn every morning to collect news from the Nine Worlds, and every night these supernatural birds would report back to him. Odin would walk the earth, searching for wisdom and knowledge and checking in on people that he favored as well as people that he distrusted. Odin was also the "Chooser of the Slain" who - along with Freya - chose who judged the worthiness of people to take a place in Valhalla.

Odin is said to live in a supernatural world called Asgard, a realm removed from our reality and only accessible by crossing the Bifrost bridge or ascending the trunk of Yggdrasil (world tree). Odin often battles against the ice giants (or front giants). In comparison, a good portion of Scandinavia is inside of the Arctic Circle - uninhabited frozen places in which life is nearly impossible. The early people of Scandinavia naturally equated those Northern mountainous, inhospitable regions of the midnight sun and the northern lights as a place of magic and the "land of the gods and giants".

And of course, Vikings were commonly known as "The Northmen" to the rest of the world at that time.

As much as I would *LOVE* to say that Santa is really a Pagan God that I pay homage to do on a regular basis, the very thought of that is quite comical. Santa Claus is mealy a fictional character created for a purpose based on stories assimilated from many different histories.

The purpose of this Blog was to show you the big picture of how the story came to be and how each piece of the puzzle fell into place, based on my research at least.
Share
Previous articleNext article

Get all the latest information on events, sales and offers. Sign up for newsletter: